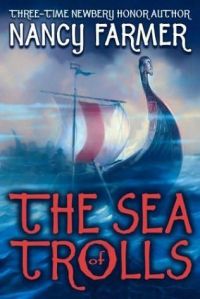 “It was a world of loss far more terrible than the songs of vanished Utgard. It was more devastating than the destruction of Gizur Thumb-Crusher’s village. It was Everything Gone. The voices of the Norns whispered about the passing of all that was bright and brave and beautiful. You could only watch it die. You could only go down to defeat and darkness. [ . . . ]

It came to Jack that they were not pawns in a game that only led to destruction. The Norn’s way was not the only one. There was the Bard sitting under a tree in the Islands of the Blessed. There was the sad-eyed woman Olaf had slain during the storm. She surely was on her way to Heaven with her lost daughter. And Mother believed, though she hid this from Father, that souls returned with the sun to be born anew into the world.

It’s 793 A.D., and Jack is an 11-year-old apprentice to a Bard when his village is plundered by Northmen (or Vikings). Jack and his younger sister, Lucy, are kidnapped by the Northmen, and subsequently brought into a fantastic adventure. Jack must learn to rely on the lessons the Bard taught him in order to save himself and Lucy. He must learn to tap into the magic of the life force he serves, and he must also believe in himself enough to be the hero of his own life.

The passage above comes pretty late in the novel, as Jack is attempting to find Mimir’s Well and drink the song-mead contained within. He will then be able to reverse some accidental magic he invoked upon the wicked queen of the Northemen’s land, and save his sister Lucy from her fate as a sacrifice to Freya. The passage is beautiful in its structure and parallelism, but it also brings up an interesting conflict in the novel: who controls fate? Are the trolls right in protecting their land and casting a vicious, deadly winter on any human who gets too close to their lands? Are the Norns right in controlling who gets to drink from Mimir’s Well? Is the life force that Jack serves the one, true Being controlling everything, or are there multiple gods and realities?

These are excellent questions, and I would love to be able to teach this in a classroom and have my students debate these questions. I think it’s great when a book can be entertaining and humorous, but also leave the reader pondering philosophy and reality. I also learned a lot about Norse mythology–Yggdrasil, Valhalla, Thor, Odin, and others play pretty major roles in the plot.

Another cool thing about this book? I picked it up during the second week of summer school–the week we began studying Old English in HEL. This book occurs during that time period. I read about the Viking invasions and the influence of the Northmen on the English language, and the very next day, I began reading a novel about Viking conquests. I could read some of the Saxon language that the characters spoke because of my class. I knew who the real Ivar the Boneless was after reading about it in my textbook. It’s so cool when a book I’m reading for fun is actually relevant to something I’m studying in school.

Anyway, The Sea of Trolls is an excellent, adventurous novel. It’s gripping and humorous, and truly literature written for young adults. This is the second novel I’m read that she’s written (the other one being The House of the Scorpion), and I highly recommend both of them to you if you’re looking for great writing and thought-provoking literature.