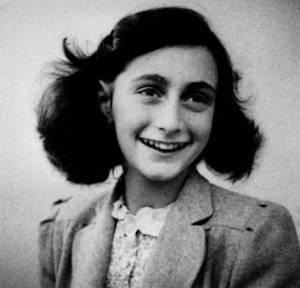 “I lie in bed at night after ending my prayers with the words [“Thank you, God, for all that is good and dear and beautiful”] and I’m filled with joy. I think of going into hiding, my health and my whole being as [good]; Peter’s love (which is still so new and fragile and which neither of us dares to say aloud), the future, happiness and love as [dear]; the world, nature and the tremendous beauty of everything, all that splendor, as [beautiful].”

-Anne Frank, The Diary of a Young Girl (The Definitive Edition)

I finished this book tonight. It’s really hard to read a book and know that as I finish each entry, I’m a day or two closer to her death. Every time she mentions a break-in at the warehouse of the building in which their hidden, or another person arrested for hiding a Jew, I wondered if people realized yet that eight people were hidden in what she called the “Secret Annex.”

Certain entries could be the diary of any fifteen-year-old girl. (For that matter, they could be a diary entry I wrote yesterday.) Then, Anne discusses the fact that they’ve been hidden for two years, or that they’re eating rotten lettuce, or that the man who delivers potatoes has been arrested for hiding Jews. Suddenly, the fact that she doesn’t get along with her mother or that she thinks she’s falling in love with Peter seems to be extra-weighty. Her dreams of being a writer, of going to school to be a journalist, are bittersweet. Although she certainly hoped and dreamed it, she would never know for sure that millions of people decades later would still be reading her words, would still care about her story.

There were tears in my eyes as I read the afterward to the diary. In the 323 pages of the definitive edition, I grew to know Anne, her sister and parents, and the other inhabitants of the Annex well. I rejoiced when Anne and Peter kissed for the first time. I grew angry when Anne’s mother berated her for a seemingly insignificant matter. Then, to read the afterward, and find out that only Anne’s father Otto survived, was heartbreaking.

While the book is engrossing and not a taxing read, as far as vocabulary goes, it’s definitely hard to read in regards to content. When I closed the book, I felt like I’d lost a friend (cheesy, huh?). Nonetheless, I’m glad to have read it. I think I’ll go write in my diary now. 🙂

[Note: the title of this blog is from the song “Holland, 1945” by Neutral Milk Hotel. One of my students wrote a review of the album In the Aeroplane Over the Sea for a class assignment and has been reminding me to listen. The whole album is apparently Anne-Frank-themed, but this song in particular is striking. The link is to a video someone made containing images of Anne Frank and other images from World War II. It’s not exactly pleasant, but it is poignant, if you care to watch.]