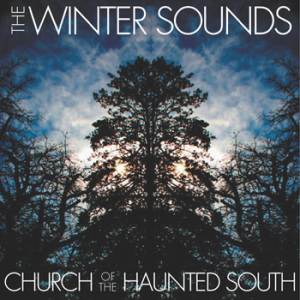 It’s no secret my deep obsession love for my favorite bands, specifically Civil Twilight and Switchfoot. 🙂 Well, my friend Michele happens to appreciate my obsession, as she is a total fangirl herself. Her band of choice? The Winter Sounds. After realizing her obsession for this band, I had a listen and liked what I heard.

But it wasn’t until I bought their new album Church of the Haunted South that I became a real fan. (Check out this excellent album review here.) First, I was thrilled by the title–at the end of the spring semester, I wrote a paper on William Faulkner and Flannery O’Connor and the concept of the Christ-haunted landscape. Ironically, this album came out just before the paper was due, so The Winter Sounds serenaded me through the arduous paper-writing process.

The band played a show in Greenville about two weeks ago (to which I gladly accompanied Michele) and when she introduced me to Patrick, the lead singer, I eagerly asked him about the title of the album. The idea of a religion-haunted South is a theme of the album, and all the band members have religious backgrounds, but he’s not necessarily referencing O’Connor. Perhaps just proof of how pervasive this idea is?

Anyway, the album isn’t going to be officially released until July 7 (the same day Civil Twilight is supposed to release theirs!), but it’s available for download already. Note: the band funded this project on their own, so by paying the $10 it cost to download the album, you’re supported struggling, independent, amazing musicians. 🙂

The album starts off strong with my favorite songs, “Swallowed by a Lonely Sea.” Sing a song about the ocean, and I’m hooked, and this song does not disappoint. Patrick’s vocals are astonishing–ethereal and lonely, they lend a perfectly stark tone to the beginning of the album.

The second track, “Trophy Wife,” has the potential to be one of the album’s biggest hits, I think. It’s energetic and addictive–a good summer song.

The third track, “O’Fear” had me convinced Patrick has lepruchan blood in his veins, although he’s actually just from Easley, SC. It has some of my favorite lyrics from the entire album: “Fear, o’fear, I love it when you come a-haunting me with terrible nightmares. Fear, o’fear, you ‘ve been in every shadow, counting down the hours of my long life.” The imagery! Such a great song!

Track four, “Candlelight,” is another catchy, addictive song. It gets stuck in my head, but I never mind at all. The song continues the theme from “O’Fear”: what happens when we die? We grow older, and it could happen naturally, or we could be “struck by a car on the streets of Atlanta” (much like Margaret Mitchell, if you know anything about her). No one knows for sure when or how death will come.

Speaking of Margaret Mitchell, the band pays ode to her famous character in “The Heart of Scarlett.” This song uses the most famous personification of the antebellum South to continue that haunted theme. Plus, this song might have been my favorite to hear live.

These are just some of my favorite tracks, but the entire album is just as solid–only great songs the whole way through. Totally worth the money to download it. And if you happen to hear of them playing a show near you, you should definitely be there! I don’t know why they’re not HUGE yet. How has the world not discovered how amazing this band is?

And, of course, check out their MySpace for tour dates and to hear some of their music. I’ll bet you’ll be just as eager to buy the album as I was!